Originally posted on June 22, 2013 and cross-posted here from Six Degrees of Francis Bacon (please check out their project site to learn more about their work on early modern social network analysis)

The Six Degrees of Francis Bacon (SDFB) team is delighted to introduce here the first in an occasional series in which we invite early modernists with expert knowledge about particular groups and figures to reflect on ways SDFB might aid their own research and on how SDFB’s iterative process could be improved.

Shawn Moore, a PhD student at Texas A&M University who as curator of The Digital Cavendish Project is developing exciting new methods to study early modern networks, examines our early attempts to reassemble Margaret Cavendish’s associations from the 58,000 DNB entries with which we began.   We sought Shawn’s feedback because of his demonstrated knowledge about both Cavendish in particular and digital methods more broadly.

We told Shawn, “be completely honest and fully critical.  If there are wrong links do say so; if there are important missing connections, that’s just as important; if there’s something useful that we can’t yet do but that you think would be crucial, let’s hear it.  Again, it would be great also to hear how the graph or confidence intervals might be useful to you and your research, but you should by all means go beyond that as warranted…The point is that this is very much a collaborative, iterative process.”

Any social network analysis of Margaret Cavendish, Duchess of Newcastle upon Tyne (1623?-1673) must deal with two important characteristics of the famed writer’s reputation: her infamous, self-proclaimed shyness, and the exaggerated yet continually perpetuated reports of her eccentric megalomania. Margaret’s own textual practices complicate this relationship even further.

In fact, it’s a curious case in regard to Cavendish’s perceived network that she at once downplays her own relationships with her early modern contemporaries, yet at the same time embeds her texts with complex sociable relationships and consciously distributes her texts to the intellectual hotspots of her time. These apparent contradictions and her infamous reputation still fascinate Cavendish scholars. It makes social network analysis particularly interesting because it requires thinking about networks in a different way.  In many ways, her networks are non-traditional in that they often exist outside of and beyond Cavendish herself. 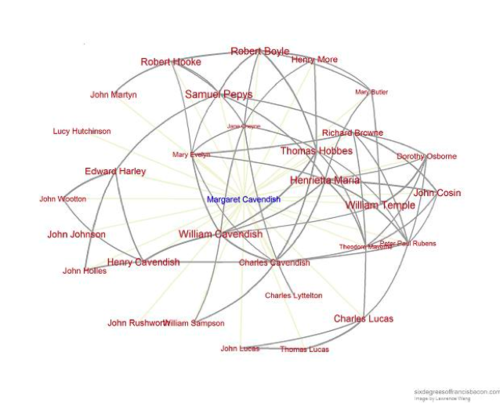 In the visualization produced by SDFB (Figure 1.), we see an evenly spread layout of nodes showing a rather impressive network including famous contemporaries such as Samuel Pepys, Robert Boyle, and Thomas Hobbes. The confidence interval visualization (Figure 2, after the jump.) indicates the reliability of estimated relationships, how likely it is that Cavendish “knew” that person (see Network Inference post on the problems regarding “knew”), based on the DNB data. In this case, with a confidence of .9 we can reliably estimate that Margaret knew William Cavendish, her husband the Duke of Newcastle. But with few exceptions, the majority of nodes are people with whom Margaret had little to no direct contact. Samuel Pepys and Dorothy Osborne, with .65 and .80 estimates respectively, are not known to have interacted with Margaret at all, though their impressions of her and her work still dominate traditional representations of the early modern writer. 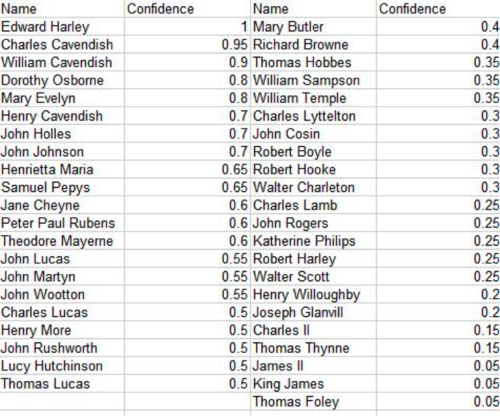 Confidence Estimates based on DNB data

This leads to quite an interesting aspect regarding Cavendish’s network, an aspect that can help us explain, or further investigate, our assumptions regarding how networks are formed and utilized by women writers like Margaret Cavendish. Of significant interest is that the DNB data shows how important extra-personal (looking for a word that indicates connections beyond the intra-personal) connections are for the network Cavendish constructs, and to the networks that are constructed around the reception and reputation of “Margaret Cavendish,” thus exposing an important structure in the sociable practices at play during the period. Likewise, it also indicates how we value networks, especially of women writers.

Looking closer at the nodal layout in Figure 1, it is important to note that the majority of the nodes are male. Aside from Margaret, there are only five other women represented, two of whom Margaret did not know directly (Lucy Hutchinson and Dorothy Osborne). Also curiously absent are Margaret’s sisters and her mother, Elizabeth. Though the visualization does capture some of the greater influences in Margaret’s life and writing, including William’s brother Charles Cavendish and Thomas Hobbes, female influences including Béatrix, Duchess of Lorraine and Anna Maria van Schurman are not represented. These absences are interesting because they skew the male dominated network taken from the DNB data.

Two absences are especially curious given that the network so heavily favors persons connected to Cavendish’s textual production and her infamous reputation constructed by her contemporaries. Elizabeth Chaplain (later Elizabeth Topp) served as Margaret’s handmaiden and was often charged with delivering Cavendish’s manuscripts to the publisher, and Constantijn Huygens, the Dutch poet with whom Margaret shared her work and exchanged correspondence during Margaret’s time in exile, are not represented. In fact, a number of persons directly connected to Margaret and William during their exile in France and Antwerp are absent (which may be due, in part, to the collection of data from a Britain-centric source, an issue for further consideration when selecting and analyzing social networking data). The one notable exception is the artist Peter Paul Rubens who originally owned the home the Cavendish’s rented while in Antwerp.

That Rubens had passed away in 1640, several years before the Cavendishes would ever come to Antwerp, and that he has a confidence estimate of .60 puts the data intervals in question. But not if we alter how we think about what the network and the data from the DNB are constructing through these visualizations. Margaret’s social network was dramatically larger than the one shown here (you can see a larger visualization created by the Digital Cavendish Project), but the visualizations produced by the SDFB team tell an important story about how networks vary and possibly show how they vary between male and female writers in the early modern period.

It is clear from these visualizations the stronger links between nodes are those that connect individuals who altered, or constructed a particular view of Margaret Cavendish. Whether it was Samuel Pepys or Dorothy Osborne, who deemed Margaret an eccentric and impossible woman, or Charles Lamb who admired the glorious flame left by Cavendish and her written texts, or even Robert Hooke and Robert Boyle who briefly interacted with Margaret during her groundbreaking visit to the Royal Academy, the structure of this particular network rests on a Margaret Cavendish as constructed throughout history. This is not necessarily a bad thing. Yes, important aspects of Margaret’s network are missing, but this work does show a clearer view of how Cavendish has been constructed throughout history and it can help scholars begin to track and better understand the complex networks at play in the life and work of Margaret Cavendish, Duchess of Newcastle upon Tyne.